Five Reasons Why The Panthers Can Win MNF Without Cam Newton 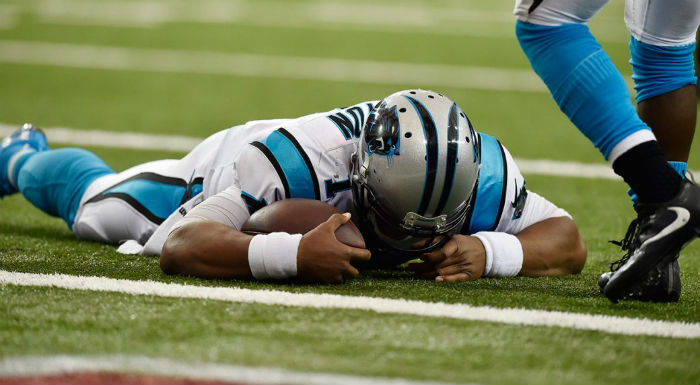 It’s been a tough start to the season for the Panthers, who appear to be the latest victim of the infamous “Super Bowl Hangover”. Carolina comes into Week 5 with a 1-3 record, and they will not have the reigning NFL MVP under center when they host the Buccaneers on Monday Night Football. That doesn’t mean they won’t win the game though, and here are 5 reasons why you might still want to bet on the Panthers:

Newton hasn’t played very well at all, completing just 58 percent of his passes, with six touchdowns and five interceptions. He was terrible in a home loss to the Vikings two weeks ago, throwing for 262 yards and three interceptions on 21-of-35 passing.

Derek Anderson was picked off twice after replacing Newton in last week’s loss to the Falcons, but he stepped right in and moved the ball up field. He threw for 172 yards and two scores, and he was quite accurate completing 17-of-23 passes. The 33 year old veteran started two games in 2014, and both of those came against the Tampa Bay Buccaneers. He threw for 507 yards and three touchdowns on 66 percent passing, with no interceptions. The Panthers won both games.

While Carolina’s defense has really been a disappointment so far, the Buccaneers rank next to last in the NFL allowing 32 points per game. Injuries to defensive tackle Gerald McCoy and defensive end Robert Ayers will make matters even worse here on the road in Carolina.

The Bucs have really struggled away from home, failing to cover the spread in four of their last five road games. Five of Winston’s eight interceptions have come in his two starts on the road. They turned the ball over five times in a 40-7 loss at Arizona in their last road game.

The second year quarterback has been picked off eight times in four games this season. He’s played poorly in previous games against the Panthers. Last year he threw six picks and just a pair of touchdown passes, losing both of his starts versus Carolina. With his first and second string running backs sidelined by injury, the pressure will be on Winston to carry the load offensively.