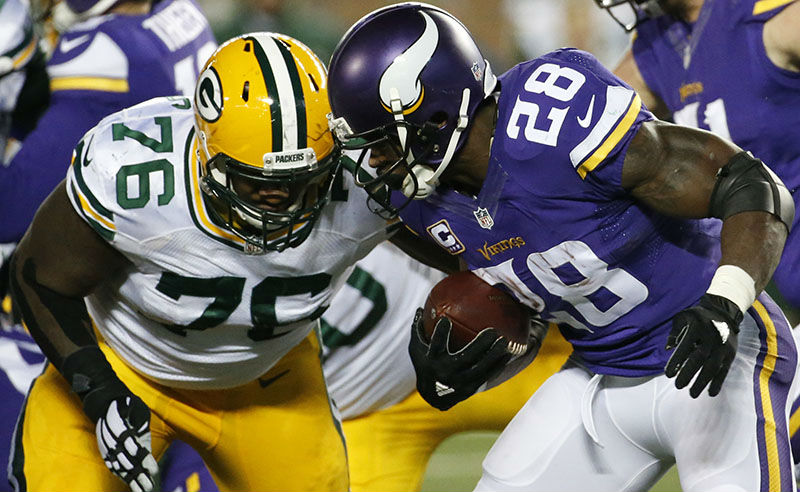 Marc David takes a look at the NFC North, exclusively at JesseSchule.com

It looked like Green Bay would run away with the division after they got off to a 6-0 start but Rodgers didn’t throw for 300 yards once in the last 7 games of the season and it was the Vikings and Adrian Peterson who did the running. Minnesota won five straight coming out of their bye week in early October, and the Vikings never looked back.

The Lions had to be one of the worst teams in the NFL the first half of the season when they lost seven of their first eight games before winning six of their last eight. QB Stafford was benched for poor play in the fifth game and then finished with a very good second half as he returned throwing for 405 yards in his first game back but it was too little too late as the damage had been done.

The Bears were in position for a possible playoff run sitting at 5-6 but then they dropped four of their last five games and the inconsistent play on offense had the Bears ranked 23rd in passing and 21st in scoring.
Lets take a look at all four NFC North teams, and where they stand heading into the 2016 season:

Projection: QB Rodgers had his lowest rating as a starter last year but still threw 31 TD’s and 8 picks. It wasn’t so much him as losing Jordan and an under achieving Lacy that affected his play. Randall Cobb should play better as well now that there isn’t as much pressure on him because his production dropped as well. Davante Adams needs to play better and TE Cook has to hold on to the ball better to bring this offense back to a force.

With one of the best offensive lines out there, only injuries seem to be able to stop this team from producing. They picked up a few offensive linemen in the draft to be on the safe side if injuries hit.

Their defensive front line is solid with mike Daniels and Julius Peppers healthy. Other than Clay Matthews who moves to the outside position everyone else is in the running to start at LB including Blake Martinez drafted out of Stanford.

Their secondary may be the heart of the defense with 2nd year players Damarius Randall and Quentin Rollins standouts and Dix and Barnett possibly the best safety duo in the league. There is no reason other than major injuries that this team shouldn’t run away with this division.

Projection: QB Bridgewater had a fine first year but his second wasn’t as sharp although he does have 17 wins under his belt. He plays better in a spread out offense with more short passing, but Minnesota wants to have more of a drop back long pass offense. There is no question that Pederson is a great running back but isn’t a good receiver or pass blocker and that keeps him on the bench in some crucial game situations. Asiata and McKinnon have been filling in in those situations. But one thing is certain and that is his running game can open things up for Bridgewater’s game.

Diggs had a great season catching the ball last year but tailed off in the second half. He will need help from Loquon Treadwell to keep defenses honest. The offensive line has 5-7 players that have had good seasons in their careers but they haven’t seemed to have put it together lately. All positions are up for grabs and the new offensive line coach was brought in just to make it come together.

The defensive line have Joseph and Floyd that are great in the middle at DT and a very capable Griffen at DE.Hunter had a good rookie season as a run defender and pass rusher so it will be interesting to watch him this season with that talent to back him up. Anthony Barr is one of the better young LB’s in the league and between him and safety Harrison Smith who plays well near the line, the Vikings should be able to pressure QB’s a lot more this season. Smith could be the league’s best at his position. Munnerlyn and Newman both had solid years and this unit might be one of the best this upcoming season.

Projection: Cutler’s biggest problem has been his inconsistency. When he’s good he is very good but when he is bad the Bears are in trouble. In all fairness though injuries that destroyed their receivers didn’t help him out to say the least as he did have his best statistical year with a 92.3 QB rating and he threw 21 TD’s with 11 picks. If his receivers stay healthy he should have a good season. WR Kevin White missed all of last season and Alshon Jeffery who only played in nine games was very good gaining 2.554 yards and catching 17 TD’s.

Their running game since losing Matt Forte is up in the air and is left to young guns Jeremy Langford and Ka’Deem Carey who have the talent but need to prove themselves.

Their defensive front is lead by NT Eddie Goldman who was their best as a rookie last year and picked up two very good free agents Akiem Hicks a DE from the Pats who was one of heir key players. They grabbed inside LB’s Danny Trevethan and Jerrell Freeman in free agency as well but did nothing to an already bad secondary and will leave it up to 3 rookies to compete for playing time.

This all should make for a better team than last year but as a playoff team that remains to be seen.

Projection: QB Stafford has had two sub par seasons in a row but had an excellent second half last year, throwin 19 TD’s and just two picks in the last seven games. He will have to adjust with the Calvin Jackson having retired and needs his receivers to stay healthy. They picked up Marvin Jones who was the #2 man in Cincinnati as a free agent and with Golden Tate should give Stafford two excellent targets.

Their offensive line allowed 44 sacks last season and that must improve. In order to make that happen they picked up veteran Geoff Schwartz and used three of their first five picks in the draft on front line material.their top pick Taylor Decker is a run blocking specialist who will have to protect Stafford at left tackle.

RB Ameer Abdullah will fill the void left by departing Joique Bell who along with Theo Riddick as a receiving back will be depended on to make the offense run.Their defense took a beating with injuries to DeAndre Levy and Haloti Ngata. With those two back and the addition of rookie A’shawn Robinson as well as Tyrunn Walker the Lions should be solid in the interior.

Their secondary is anchored by Glover Quinn and with Pro Bowler Ansah as a pass rusher, the Lions should have a decent pass defense ready.