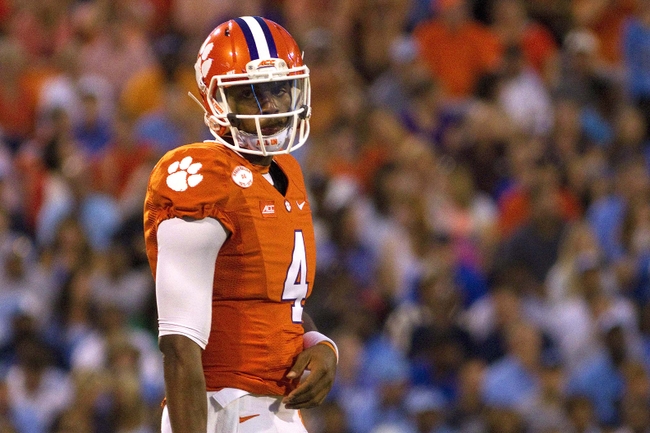 This is a 10* play on the Clemson Tigers.

The Irish have managed to remain undefeated and stay ranked in the Top 10 despite losing their starting quarterback Malik Zaire and running back Tarean Folston. This will be their toughest test by far, and I can’t seem them hanging with the Tigers at Death Valley.

After finishing first in the country in total defense in 2014, the Tigers are currently ranked 4th in yards allowed this season. Clemson has the advantage of additional rest coming off a Thursday night game last week at Louisville. The Tigers should be well rested and well prepared for this “must win” game for both teams. The winner will be a playoff contender, while the loser will likely drop out of the playoff picture.

Notre Dame is 2-5 on the road versus ranked opponents during the Brian Kelly era, and they narrowly avoided suffering a sixth straight road loss at Virginia two weeks ago. The Tigers are 41-6 at home in seven seasons under Dabo Swinney, winning 11 straight. Deshaun Watson has completed 77 percent of his passes for 442 yards with five TDs and just one pick in two home games this year.

The Irish have been doing a lot of talking on Twitter ahead of this game, and Clemson safety Jaron Kearse took exception: “They obviously don’t know what we do down here in Death Valley,” Kearse said.