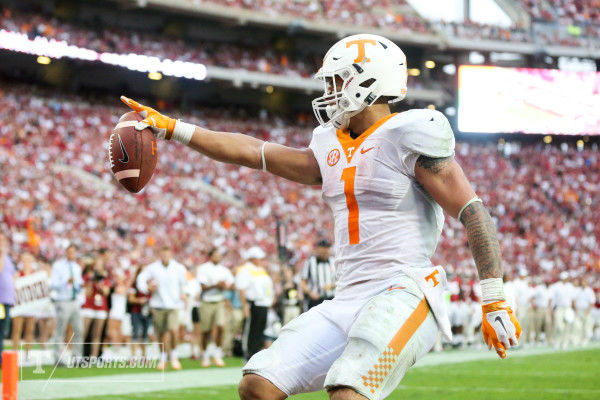 The SEC Champion has come out of the West for seven straight seasons, and the bookmakers expect that trend to continue in 2016. The SEC EAST is a lot more top heavy than the West, with a steep drop off after the Top 3 (Tennessee, Florida and Georgia). Las Vegas bookmakers have the Vols favored to represent the East in the SEC Championship Game, and that makes plenty of sense when you consider they finished last season with six straight victories.

Lets take a look at all seven SEC East teams, and where they stand heading into the 2016 season:

Projection: Tennessee was one of the youngest teams in the country last year, and they return 18 starters from last year’s 9-4 team. They weren’t far off from greatness, with all four of their losses coming in games decided by five points or less. The biggest question mark for the Vols is their passing game, with Josh Dobbs struggling to connect on intermediate and deep passes. Even if Dobbs doesn’t show improvement, they can lean on Jalen Hurd and Alvin Kamara, who might be the best backfield duo in the country. There is little doubt that Tennessee should be the favorite in the East.

Projection: The Bulldogs come into the 2016 season with a new coach, as Kirby Smart replaces Mark Richt after a disappointing 2015 season. Star running back Nick Chubb suffered a gruesome knee injury last October in a loss to Tennessee, but the latest reports have Chubb expected to be 100 percent for the season opener versus North Carolina. Even if Chubb hasn’t fully recovered, the Bulldogs will be in good shape with Sony Michel who ran for 1161 yards and eight TDs in just eight games as the starter last year. There is a lot less certainty at the quarterback position, where they hope to see improvement from fifth year senior Greyson Lambert. The defense should be a strength under Smart, who made a name for himself as the defensive coordinator at Alabama. The Bulldogs also have a favorable schedule, facing both Florida and Tennessee at home.


Projection: Florida comes into 2016 as the defending SEC East champs, but they closed out last season with three straight losses. While the Gators had a Top 10 defense in 2015, they only averaged 26.5 points per game on offense, ranking 85th nationally. They will have a new quarterback under center this year, and it will be their ninth different starter since Tim Tebow’s final year in 2009. Whoever wins the job will hope that an offensive line that allowed the most sacks in the country last year will show significant improvements. Not only were the Gators out-scored 97-24 in their final three games, they looked terrible in a 9-7 home win over Vanderbilt, and a 20-14 OT win at home to FAU. I don’t like Florida’s chances of repeating as SEC East champions.


Projection: The Tigers lost seven of eight games within the conference a year ago, and their struggles came largely due to poor play from the offensive line. A lack of depth up front could be an issue again in 2016. Missouri averaged just 13.6 points per game in 2015, ranking 128th nationally. Defense should be a strength, with plenty of returning talent from a squad that ranked in the Top 10, allowing just 16.2 points per game. With an unproven quarterback throwing to a mediocre receiving corps behind an offensive line that is being held together by duct tape and rubber bands, it might not matter how well the defense plays.


Projection: The Gamecocks lost their best offensive player (WR Pharoh Cooper) to the NFL draft, and their leading tackler in each of the last three seasons (LB Skai Moore) will miss the entire 2016 season after having off-season neck surgery. South Carolina ranked 99th in the nation in sacks with 20 and 102nd in tackles for a loss with 64 last year. This is a rebuilding year for the Gamecocks, and it will likely take a miracle just to become bowl eligible.

Projection: Kentucky has more starters returning on offense than any other team in the SEC, but plenty of work needs to be done on the defensive side of the ball. The Wildcats ranked 70th nationally allowing 27.4 points per game in 2015, and they return just one full time starter from that unit. New co-offensive coordinators Eddie Gran and Darin Hinshaw come over from Cincinnati, where they had plenty of success with a Bearcats offense that ranked in the Top 10 in passing yards (359.9) and total yards (537.8). It’s probably unrealistic to think that such success can be as easily achieved in the SEC as it was in the AAC.


Record in 2015: 4-8 Straight Up – 7-5 Against The Spread.
Projection: The Commodores took some steps in the right direction last year, and a bowl game isn’t out of the question in 2016. Despite improving on a disastrous 3-9 season in 2014 that saw them go 0-8 in SEC play, they still have a long way to go after winning just two games in conference play last season.