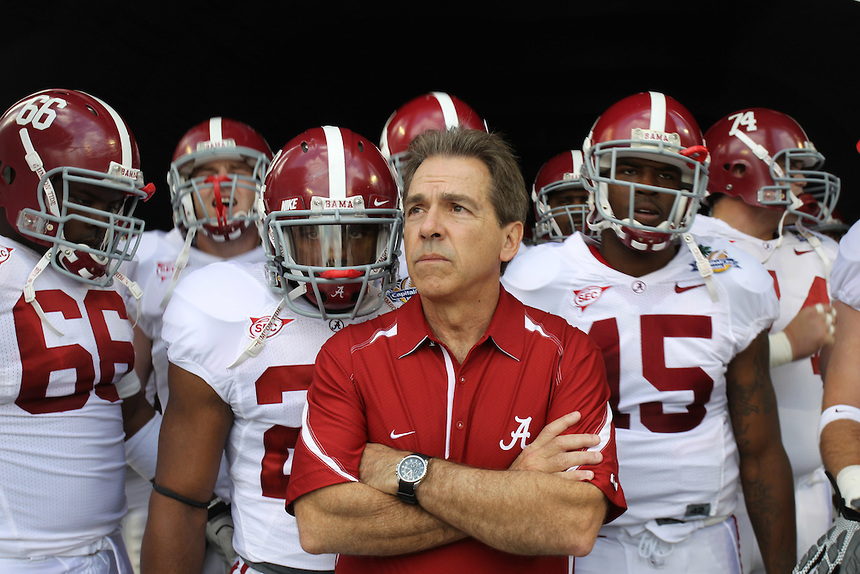 There is no denying that the SEC West has been the strongest division in the toughest conference in the country in recent seasons, and it doesn’t look like that’s going to change any time soon. Defending champions Alabama come into the 2016 season favored to win their fifth national title in eight years. The LSU Tigers are expected to give them a run for their money, and it’s worth noting that Ole Miss has upset Alabama two years in a row, last year winning at Tuscaloosa. All three teams are projected to be in the Top 10 in the first edition of the 2016 College Football Rankings.

Lets take a look at all seven SEC West teams, and where they stand heading into the 2016 season:

Projection: Alabama loses a lot of talent from last year’s championship team, especially on offense. They need to replace a starting quarterback, but their biggest losses come in the backfield with the departure of Derrick Henry and Kenyan Drake. Several defensive stars have also moved on to the NFL, but nobody does a better job at recruiting new talent than Nick Saban at Alabama. The expectation is that Bo Scarbrough will come in and fill the shoes of Derrick Henry, and another unproven quarterback will come along and do what Jake Coker and A.J. McCarron did before him. While I wouldn’t be shocked to see it all come together, I certainly wouldn’t want to bet on Alabama as the favorite with so much uncertainty. Their schedule is also loaded with tough road games, playing at Mississippi, Arkansas, Tennessee and LSU.

Projection: The Tigers return 18 starters on both sides of the ball, and all eyes will be on Heisman frontrunner Leonard Fournette. Fournette led the nation in rushing last November, but after sputtering in the final month of the season, he finished third behind Derrick Henry and Christian McCaffrey. He bounced back with an outstanding performance, running for 212 yards and four TDs in the Texas Bowl in a 56-27 win over Texas Tech. If the Tigers are going to be a contender in 2016, they’ll need returning quarterback Brandon Harris to be better than he was a year ago. While there are no easy games in the SEC West, the Tigers will have the benefit of home field advantage when they play Ole Miss in October, and Alabama in the first week of November. I really don’t see this team winning a National Championship with Brandon Harris at quarterback.

Projection: The Rebels are in good shape when it comes to the quarterback position. Chad Kelly returns after leading the SEC in passing yards with 4,042, and TDs with 31. The question is, can they plug the holes on the offensive line and keep him upright. They won’t have much time to figure things out, opening the season with a tough road game at Tallahassee. On a positive note, they face Alabama at home two weeks later, and they’ve won that matchup in each of the last two seasons. If you’re looking for value, the Rebels appear to be a good sleeper pick given their strength at quarterback.

Projection: Brett Beilema was on the hot seat after the Hogs lost four of their first six games in 2015. They went on to win five of their final six, including shocking upsets on the road at Oxford and Baton Rouge. A strong finish has led to optimism heading into 2016, but there are plenty of reasons for concern. They have to replace Brandon Allen, who was the top rated passer in the SEC last year, and finished second in TDs with 30, and third in passing yards with 3,440. They have depth at wide receiver, and should be strong on defense, but I don’t expect this team to pick up where it left off last season.

Projection: The Aggies have started each of the last two seasons with five straight wins, but have faded down the stretch, finishing 8-5 in 2014 and 2015. Coach Kevin Sumlin’s reputation as an offensive guru took a hit last season, as poor quarterback play resulted in an average of just 28.3 points per game, finishing 71st nationally. Had they scored at least 30 points in every game, they would have had a record of 12-1. They come into the 2016 season stacked on defense, and loaded at wide receiver with Josh Reynolds, Christian Kirk and Ricky Seals-Jones. Veteran transfer Trevor Knight will step in as quarterback, and he was 11-4 as a starter with Oklahoma over the last three seasons. He showed what he was capable of back in the Sugar Bowl in 2014, throwing for 348 yards and four TDs in a 45-31 win over Alabama. This looks like a perfect situation for an experienced quarterback like Knight to thrive, and if he does the Aggies will be a serious contender. If you’re looking for a longshot, the Aggies look like a solid bet.

Projection: Many experts had Auburn finishing first in the SEC last season, but the Tigers didn’t live up to all the hype. There’s not much to be excited about here in 2016, with questions at quarterback, and an unproven corps of inexperienced receivers. They will play their first five games at home, but they open the season against national runner-up Clemson, and then they host Texas A&M and LSU at the end of September. They could potentially lose all three of those games, leaving them with tough road games at Mississippi, Mississippi State, Georgia and Alabama.

Projection: The Bulldogs are going to have to replace Dak Prescott, who finished second among SEC quarterbacks in passing yards. He also ran for 588 yards and 10 touchdowns. They return just one starter from the 2014 season that spent five weeks ranked first in the country. While they won nine games last season, they were 0-4 against Top 25 teams. This looks like the least likely team to emerge as a contender in the SEC West.